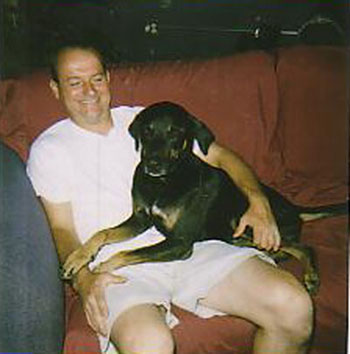 I saw Zach in the World Herald ad, stating he was T&C Dog of the month. His picture reminded me of my other dogs due to his colors. I wished I could meet him, however I tried to put it out of my mind. On Mother’s Day my wife saw the picture in the paper. Well, it worked. She called Town and Country and then I went to go see him. He was the first dog I saw when I arrived. I thought that he needed me, as so many dogs need a person to step up and embrace them into a family. He is wonderful. At first he was going to live at my business but after my other 3 dogs accepted him, he became a member of my pack. He wanted to run with my dogs in the country and when I finally let him off leash, he was thrilled. He ran step for step with my rottweiler, performing scout duties. Since we live in the sticks, he can be off leash more than on. He is wonderful, obedient and loving. He can be trusted with all dogs, kids, babies and now horses and billy goats. He fulfilled his dreams of chasing cats, barking at squirrels and sleeping on a king size bed. He doesn’t know he was in a cage most of his 7 years. He now knows when its hot he wants air conditioning, when he’s lonely, he knows he can get attention from his pack and Mom and Dad. He loves life and has changed my priorities. I now will only adopt or parent older dogs. They are superior in training and need to get a chance with a family. His story is not complete. He is now an ambassador for dogs like him. We actively promote Zach’s history and hope to show people how a great dog can be missed so many times by perspective adopters. There will never be a day bigger than the day when Zach went home with me and my dogs accepted him. He now has a girlfriend (Molly). They play, kiss, sleepover and who knows?

*Pet viewing is by appointment only*